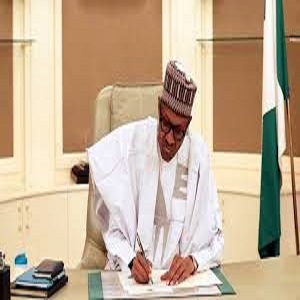 Nigerian’s youths eyeing the presidency will have to wait until 2023, President Muhammadu Buhari has declared as he signed into law the Not Too Young

Nigerian’s youths eyeing the presidency will have to wait until 2023, President Muhammadu Buhari has declared as he signed into law the Not Too Young To Run bill.

The act, signed in the presence of selected youths from the 36 states of the federation and the Federal Capital Territory reduces the minimum age requirement for elective positions in the country.

Buhari explained that the eligible age for aspirants to state Houses of Assembly and the Federal House of Representatives has been reduced from 30 to 25 years, and the office of president from 40 to 35 years.

He, however, wondered why “the age limits for senators and governors was not reduced, as originally proposed by the sponsors of the bill,” stressing this is an issue that may need to be addressed going forward.

Notwithstanding, he said the feat has increased the quality of the nation’s democracy and expanded the playing field for youth participation in politics.

The Convener of the Not Too Young To Run ¬group, Samson Itodo, who spoke on behalf of youths, praised Buhari’s effort, saying the President has written ¬his name in gold by assenting to the bill.

He expressed disappointment that Zamfara, Lagos and Kano States declined to pass the bill in their Houses of Assembly.