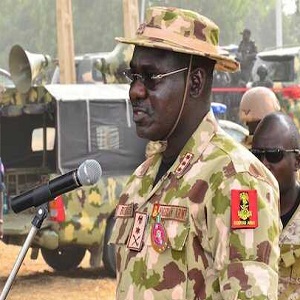 Nigerian Army Reorganizes Military Operations As parts of the efforts to combat banditry and ensuring lasting peace and security in Katsina State and the North west, the Chief of Army Staff Lt.-Gen TY Buratai was at the Forward Operating Base Daura in Katsina State where he was briefed on the operational state of 171 Battalion Daura to checkmating banditry and associated insecurities in their area of responsibility.

The army chief, used the opportunity of his Operations tour to the Battalion to pay a courtesy call to the Emir of Daura Alh Dr Umar Farouk Umar CON, at his palace in the ancient city of Daura.

Gen Buratai informed the emir that he is in Daura on a tour to 171 Bn where he was fully briefed on the combat readiness of the Bn and the state of security situation in Daura and environs and decided to pay him a courtesy visit.

He assured the emirate council and the people of Nigeria the renewed vigour and determination of the Nigerian Army to tackle the security challenges in the northwest and the country as a whole. He said his visit was in response to the concerns occasioned by the recent banditry activities in different parts of the region and Katsina State in particular.

Gen Buratai further used the opportunity to solicit from the emir, the good people of Daura and all Nigerians for their continuous prayers, guidance and goodwill, and it is just a matter of time, the NA and other security agencies will get the situation over.

While making remarks at the occasion, the emir commended the Nigerian Army and her leadership for the commitment and untiring efforts to containing the myriad of security challenges in Nigeria and in Daura emirate of Katsina State since he took over as the Chief of Army Staff.

The emir, who stated that he is very much happy and appreciative of what the Nigerian Army has done for the people of Daura and the country at large and used the opportunity to alert all Nigerians on the danger of the current dynamic and multifaceted security threats facing the nation.