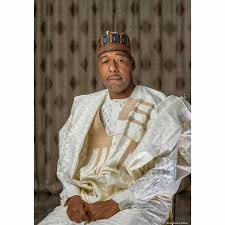 The Governor accompanied by the former Governor Senator Kashim Shettima and Senator Muhammad Ali Ndume paid at the condolence visit at his palace in Maiduguri.

Governor Zulum described the late Shehu as a person of proven integrity and a first class traditional ruler who ruled with absolute honesty and fear of Almighty Allah.

The Governor said the lost is a monumental one not only to people of Bama but the entire state explaining that through out the thirty years of his reign, the royal father has played prominent role in the promoting peace in his dormain.

Shehu of Borno, Alhaji Abubakar Garbai Elkanemi thanked the Governor Zulum and his entourage for cutting short their official engagements to pay the condolence describing it as mark of respect to the El-Kanemi dynasty.

The Shehu solicited prayers for the restoration of lasting peace to the state and quick end to covid 19 Pendamic.