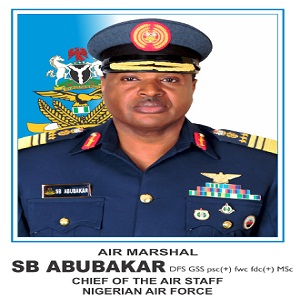 The Chief of Air Staff , Air Marshal Saddique Abubakar, says the Nigerian Air Force is to deploy more forces to Maiduguri in the ongoing fight agains

The Chief of Air Staff , Air Marshal Saddique Abubakar, says the Nigerian Air Force is to deploy more forces to Maiduguri in the ongoing fight against insurgency.

Abubakar made this known during a working visit to the Air Task Force of Operation Lafiya Dole in Maiduguri.

According to him, the deployment of more forces was to strengthen the task force.

The Chief of Air Staff who inaugurated some projects including accommodation during the visit said it was meant to cater for the additional personnel to be deployed.

The security challenges faced by Nigeria are obstacles to development that can only be surmounted if we remain resolute in the fight against insurgency and other forms of criminality.

He however, make bold to say that they have, so far, confronted these elements head-on, and for that, he is proud of all gallant officers and men of the Nigerian Air Force.

The NAF, through the Air Task Force Op LAFIYA DOLE, has continued to perform very critical roles in providing the much needed air support required for ground operations.

In pursuit of NAF constitutional roles, and in line with my vision for the force, he have constantly sought, not only to evolve strategies that will enable the Service adequately project air power to effectively and efficiently deal with prevalent security threats.

He said that his administration would continue to do its best to ensure that accommodation problems are eradicated in the NAF.

As they inaugurate these projects today, he urge them all to utilize the facilities with a high sense of responsibility.

HE said NAF expectation that you will reciprocate by dealing with more effective punches against the remaining Boko Haram insurgents.

He urge the air men not to relent as they have to continue fighting until the insurgents are completely eliminated.

The CAS further cautioned officers and men on the  challenge of COVID-19 and urged them to follow all precautionary measures directed by medical experts to remain safe from the pandemic.