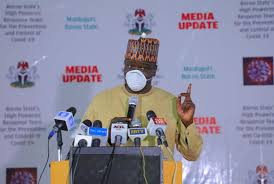 The deputy governor made the appeal when he visited Chabbal Gubtori village where the victims were taking refuge to sympathise with them. Borno St

The deputy governor made the appeal when he visited Chabbal Gubtori village where the victims were taking refuge to sympathise with them.
Borno State Deputy Governor, Umar Usman Kadafur, has appealed to the people of Sheriff Makintari, Chabbal Limanti and Mashimari villages in Konduga Local Government Area who were recently displaced by insurgents to be patient as government is doing everything possible to provide them with additional security personnel.

She appealed to the state government to provide additional security in the area to protect lives and properties especially now that the rainy season is on and majority of the people are farmers.

Also, Member, Borno State House of Assembly representing Konduga Local Government, Hon Bulama Yajiwa, said all the displaced persons have fled their villages and farm lands ,stressing that unless urgent solution is provided they will lost everything.

He equally assured them that government will soon come to their aid.

The District Head of Auno, Alhaji Abba Annas Umar, thanked the state government delegation for the visit to sympathise with them and assured of their maximum support and cooperation to government and security personnel to rid the area from insecurity.